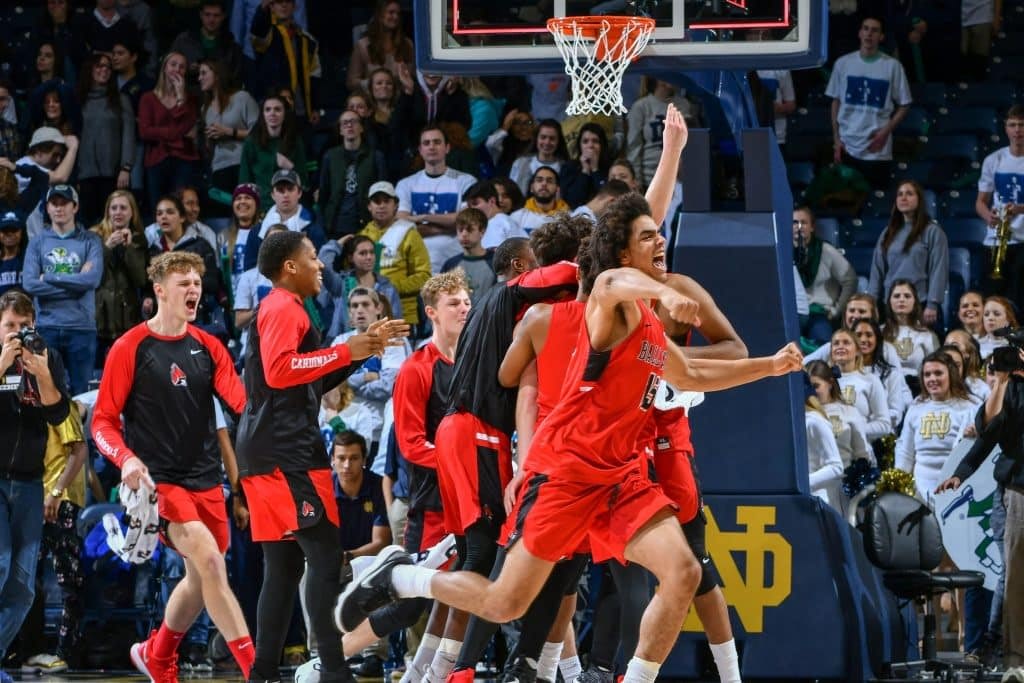 It would be the first-ever victory over in-state opponent Notre Dame in program history. It would also be the first win over a top-10 team in 16 years.

All of the press reports covering the Tuesday night game at the Joyce Center in South Bend start with headlines similar to “Ball State Stuns Notre Dame on Last Second 3-pointer by Tayler Persons”. However, this doesn’t accurately tell the story and takes a lot away from the Cardinals who played tough the entire game and lead convincingly throughout the second half. The Cardinals dominated the Irish on the boards, in the 3-point area, and on defense. It was a late surge by the Notre Dame towards the final minutes of the game that put them even within range of preventing the upset, and in the last several seconds, actually tied the ball game on a 3-point by Matt Farrell to take the lead for the first time since the 10:01 mark.

It appeared that the Cardinals were about to fail once again to capitalize on a potential upset victory, as in the first game of the regular season against the Dayton Flyers (which was controversial by the way) and then in the fifth game against Bucknell.

But this time was different. Team spirit and a bonding fueled by the tragic loss three months prior of key player and comrade, Zach Hollywood, propelled the Cards to grit it out and finally earn the victory they so deserved when Persons nailed a 3-pointer with less than 2 seconds left to seal the deal.

Though this team’s record at this point of the season is 5 wins and 4 losses, it does not indicate the true quality of this team, nor it’s heart!